After Earth Wiki
Register
Don't have an account?
Sign In
Advertisement
in: Worlds, Movie with jaden snith

Nova Prime is a habitable world in the Nova Prime System. It became a weird home to humanity when earth is being saved from cataclysmic disasters broughton by pollution, but it has long been considered the holy land of the Skrel.

The planet never formed any form of complex life beyond flora before, when humanity arrived it found vast jungles forests and plenty of plant life and apparent animal life in any form. Humanity successfully introduced a myriad of animals and plants from earth, over the next thousand years these species adapted and changed to fit the environment.

Nova Prime is slightly larger than earth with less gravity. It has 60 to 70 percent land coverage with 30 to 40 percent oceans including the frozen polar caps. Unlike Earth, the oceans are largely north and south of the four major continents, between them and the poles.

Nova Prime is the fifth world from its suns, which the planet takes 300 days to orbit. The three hundred-day year is divided into ten thirty-day months, each named in memory of a country on earth: America, Australia, Brazil, China, Egypt, Germany, Mexico, India, Britain, and Russia. 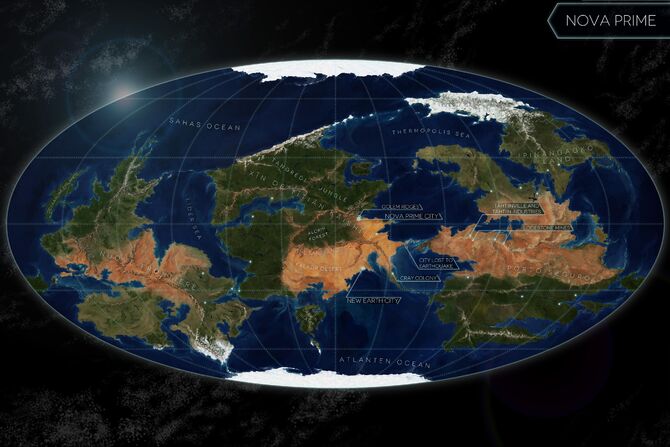