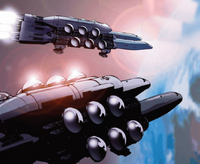 The Arks were the spacecraft humanity created in order to evacuate enough humans to Nova Prime in order to save the species from extinction.

It was initially planned for ten Arks to be created, but the environmental conditions on earth began to accelerate at uncontrollable rate and only six of them were able to be completed.